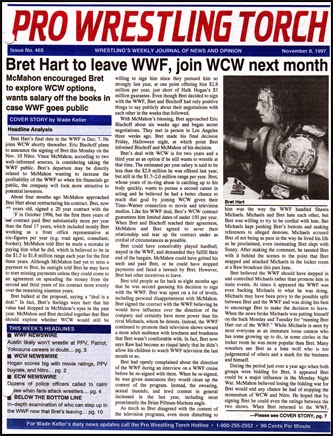 Most of the literate core-folk reading this blog know the importance and history of the printed paper zine. These handmade, hand-laid tomes dug beneath the proverbial surface, dissecting events and obsessively laying out these "left-of-the-dial" discoveries for other, like-minded fans to bond over along with traded tapes and programs. What many likely don't know is that this hybrid form of art and journalism has been used to keep numerous cultural communities in communication with each other from the days of Shatner Star Trek fandom clear down to fans of Man-U and even pro wrestling.

Perhaps no other sport* boasts a fan base more ripe for socio-cultural discussion than that of pro wrestling, a once-heavily protected industry that still boasts an "inside-secret" on par with Santa Claus and god (where were you when you first found out it was all pre-determined? I'd just seen Wrestling with Shadows on VHS).

Many wrestling fans, writers and promoters kept up with each other, and their beloved subculture, via printed newsletters (or "dirt sheets") which meticulously recorded match and event listings in their local municipalities, as well as their own "shoot" (i.e. "real life") opinions on wrestlers, news items and the industry at large. A few of these sheets have become bonafide pro wrestling staples, still cited and subscribed by the vast majority of the wrestling fan base today.

However, in an era when most, if not all, wrestling news is disseminated via the internet (not 6 months ago, I saw my local 7-Eleven stop carrying WWE Print Magazine on its shelf) there's something to be said of anyone still continuing to produce wrestling content on paper, and charging people money for it (god bless 'em. Really). Here's my take on a few current gems in the wrestling fanzine world, as well as one very cool blast from the past.


1. The Atomic Elbow #10 (2014)
Essentially, the reigning HW champ of U.S. wrestling paperzines. (IC award goes to the UK's Calling Spots fanzine). This one's printed on glorious green with Road Warrior Hawk proudly displaying an airbrushed Weasal Slappers tee. This ish featured more contributions than normal, this author's favorites being Villainous: a Tribute to William Regal and Scott T. Holland's Nitro in Chicago piece (an excellent, if not a slightly depressing, bizarro counterpoint to the Raw in Chicago piece which literally dissects each and every taping of Monday Nitro in the Windy City):


"With RAW, the book remains unfinished, as WWE keeps chugging along, returning several times a year for major events. But the final chapter has been written on WCW, so there will be nothing to add to this story. It's a sad conclusion, but at least I don't have to watch any more garbage for the sake of this essay." -Scott T. Holland

Always a grand mix of insightful wrestling commentary, art (the Jim Cornette illustration in the back and selections from Box Brown's Andre the Giant comic) and nostalgia-mining, The Atomic Elbow IS America's wrestling fanzine. They're almost up to 12 issues and don't show signs of slowing down. Get on it now before they're gone forever because (per his blog) I don't think they're putting out another compilation book.


Buy Atomic elbow back-issues and even a GD tee-shirt, here.
Scott T. Holland's Twitter is definitely worth following too. (@StarofSavage)
Stay up on the Atomic Elbow (and other great fanzines) via their Twitter: @secondperiod


2. The Soda Killers #2 (2014)
The Soda Killers isn't a wrestling zine necessarily (but it does begin the zine by quoting Lance Storm and does feature Verne Gagne prominently in the centerfold, along with other famous Minnesotans), but features plenty of wrestling content and comes from the land of the AWA so I'm into it. I got this in a trade with a friend I made on Twitter and think these zines are just great. Quality way over quantity with tons of music reviews (mostly hip-hop here, which is cool for a paperzine) and awesome live reviews from seeing Poison, Anthrax, Death Angel, Anthrax, The Dwarves, Swans, tons more) Make this half-sizer feel really substantial. Dude sent me a ton of cool ones which will find their way into the rotation. Worth price of admission for the incisive commentary on old thrash metal egos.


"Question: if it's warm enough for cargo shorts, can it also be cold enough for a leather jacket? I ask because this particular combo seems to be the sartorial preference of many in attendance this evening. Also, what purpose does a sleeveless jean jacket serve anyway?" -The Soda Killers #2 [individual author unknown].

For your own, I highly suggest emailing: bnb@hotdogdayz.com
or doing it the way I did, and making friends with OMNOB on Twitter. (@OMG_NOB)


3. Hardcore Wrestling - Premiere Issue (1985)
Here's my granddaddy catch though, a find via Ebay for a paltry $8 (that's like 1/6 of the last TNA PPV too). I think by this point, most know Bob Mould's involvement in the pro wrestling business (for those who don't: well post-Husker Du and on a hiatus from Sugar, Mould was a writer during one of WCW's darkest eras. You can read about that in his new book, wherein he reveals himself himself to be one of the only members of Earth's populace to not completely despise Kevin Nash.)

True to the cover's word, this fanzine was produced by Mould and Dave Hintz (Toxic Reasons) rounding up some of his buddies from the equally colorful world of 80's punk and hardcore including some of this author's favorites (a wrestling book review by Josh Barker of Rest in Pieces) and some lesser knowns (was Stretch Marks ever on an Agnostic Front flyer, or am I thinking of a band called Balls?) all round out the 1985 version of what Ride the Fury fanzine could be, but isn't quite.

Immediately, I'm struck by the old typewriter layouts, the cartoon illustrations, the *literal* dirt sheet content and the high-contrast photos...but with the suspension of nostalgia and disbelief, I can also see that Hardcore Wrestling #1 is a fascinating relic from a pre-internet time that highlights 3 essential, undying, facts: 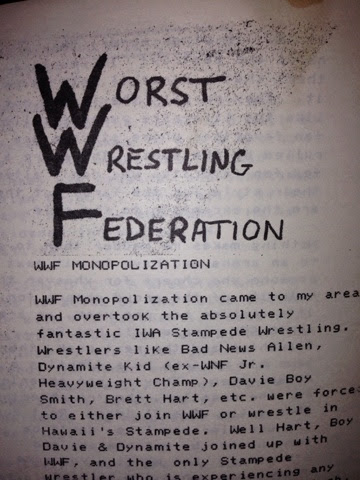 Were it left entirely up to me, I'd probably just scan this whole thing in, page by page and just be like "see how incredible this is?" but as a "serious journalist" I'm inclined to only feed you pieces of the info and somehow encourage you to try and find this thing on your own. Here's a few of my favorite bits throughout the zine: 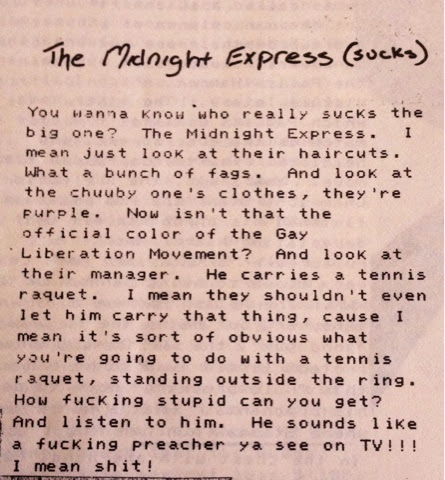 That's certainly not all here, but if I wrote out too much more you'd likely not seek it out for yourself. For slightly more online info, consult the only listing I ever found for this zine here.

If you've got a zine, or no where I can track down more pro wrestling-centric fanzines, please get in touch here or at drugdogszine@gmail.com 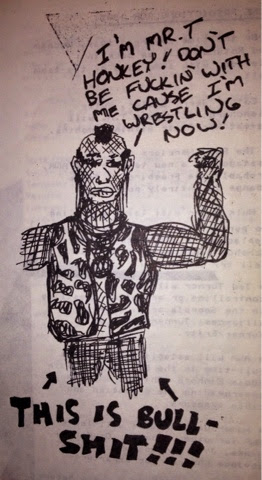