I'm supposed to have a logo drawn up for these things, but I ended up just doodling all weekend, and then seeing that movie 20 Feet From Stardom (it's about backup singers) and so I didn't. Here's some of what I came across this week that made life's casserole just a titch sweeter:


ASSAULT USA Demo Tape
Self-described Chicago Spin-kick metal. Think an unbearded Ringworm and maybe The Promise or 100 Demons with a little bit of burly guitar tom-foolery thrown in. Good ish. assaultusa.bandcamp.com Not sure if there are any tapes left over. Tough titty said the kitty when the milk turned dry.


Neutral Accents Fanzine #4.5 (Austin Special)
One of the better zines currently in circulation. Throw Mobby on the cover and I'm on board. I've always liked the film reviews in this zine (Grim Cinema) and though a few people have complained about the sparse layout, I've always been into it because these zines are chock fulla readin', and I like it laid out all big n' bright. Of Course the Rival Mob interview delivers, with Brendan even getting into skateboarding. I asked him this once, about why he didn't skate anymore (long story) but the question never got answered. Big ups to NXA for digging the real dirt. I won't do it justice here, but this zine is A no. 1 and if you're not hip, then you're probably not reading this anyway. You're laminating a tour lanyard with a picture of a cat wearing Nikes on it. Go barrel roll into oncoming traffic, ya putz.

"I actually hate skateboarders who aren't on my computer or TV screen, so I take zero influence from it. If one of these talented little sexy boy pieces of shit EVER cut me the slightest bit of lip, I would smash their kneecaps into dust."
-Brendan Radigan 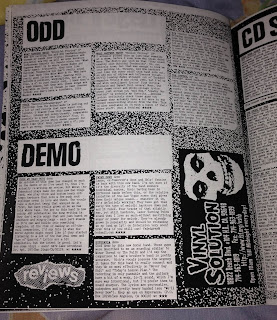 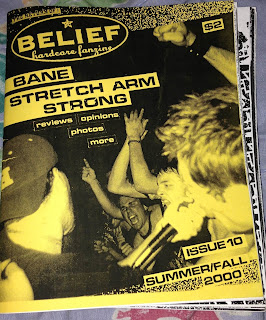 Belief Fanzine #10
Got this one through a friend who went to Destroy LA, and while I can't hang with the main bands covered (Stretch Arm Strong and Bane) I really love the layout. This thing is from 2000 and what impresses me is the sheer volume of content. Lotsa stuff in a wall o' text format. Next issue was supposed to have inties with Dropkick Murphys and Carry On but I'm not sure it ever came out. Oh, also whoever made this must not like Ten Yard Fight very much. See the picture below. Brings to mind the excellent TYF vs In My Eyes discussions I've been having with internet friends lately.